Resource to Learn About the Kimber Black Ice Handgun & More

Recently I was able to track down a place to find more information on the Kimber Black Ice handgun by finding a group of people who are interested in the Kimber line of firearms.  You may ask yourself where do you find a group like this and the easiest place I know is Facebook.

The group is called “Kimber Revolver Owners & Anything Kimber” and as of this writing has over 600 members.  It was started by Alex DiGiacomo who told me that he started the Kimber Group because he wanted a group where members could go to discuss Kimbers they currently own or ones they would like to own, where to buy them, where to buy accessories for them, post pictures of their collection of Kimbers and also to have general discussion.  One of the biggest values with the group is that members post questions they have about Kimbers they might be thinking of buying in order to get input from others who may already may own a specific model that they are interested in which includes the Kimber Black Ice.

Alex told me that he likes the Kimber line for a number of reasons: 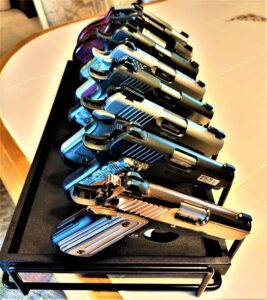 he believes that as far as handguns go, Kimber is in a class by themselves and enjoys them the most.  He does like the Ruger Mark IV 22/45 Lite, and the Sig Sauer P238 & P938, but Kimber is his first choice.

When asked what his favorite Kimber handgun is, he says the Micro 9 is his favorite, with the Micro 380 and new K6s .357 revolvers being a close second and third.  The revolvers have the smoothest trigger on a revolver that he has ever shot and the fit and finish is top notch.

Some folks believe the Kimber line is expensive but when Alex is asked about that he simply replies, “you get what you pay for”.

His advice if you are looking to purchase a Kimber for yourself, he believes purpose should be your first question.  If it’s for an every day carry, look to a smaller, lighter model, and go on from there, but he adds you can’t go wrong with any of the models.  He also cautions first time buyers that you shouldn’t plan to buy just one, as it can get addicting with the uniqueness of the different models that they offer.